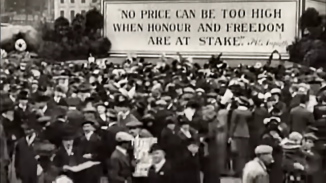 I watched a very moving World War 1 documentary focussing on the British forces’ Pals’ Brigades, a colossal blunder that decimated towns and villages. (The video has been posted at the end of this article – please watch it when you get there.) – – Of course it was removed from YT. Here’s some pages of other film offerings on YT:
https://www.youtube.com/results?search_query=Pals%E2%80%99+Brigades

Britain, as well as many other countries, lost the cream of their male genetic pool during this slaughter (World War 11 robbed humanity of most of what was left among the major combatant nations). Only a few countries’ male gene pools were relatively unscathed after these calculated reapings. It is estimated that there were 16 million deaths and 21 million wounded, including millions of women and children – altogether about 6.8 million civilians. Millions and millions of mothers were left widows – and a great percentage of these destitute, or almost, to bring up father-less children until they were old enough to die in the next one.