Midnight, and monks by candlelight

Although less than 2 miles from Oxford’s city centre St. Margaret’s is hidden behind trees and shrubbery at the end of a long and winding country lane. The church is a strange, isolated and moody little building sometimes welcoming and warm while at other times slightly sinister. It is lighted only by oil lamps and candles as it has no electricity supply.

St. Margaret’s was once the living for a priest called Nicholas Breakspear who became England’s only Pope, Adrian lV, in 1154. 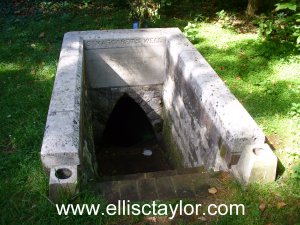 The church is also famous for its holy

well and its legendary connection to St. Frideswide, the patron saint of Oxford. This was the ‘Treacle Well’ of Alice’s Adventures in Wonderland.

One day a friend contacted me to tell me how he was reading Andrew Collins’ book, Twenty-first Century Grail and in it Andrew had reported on a trip to St. Margaret’s, Binsey following psychic clues, whereupon he and his companions had found what they had been looking for – an engraved key. They had been told (by the spirit of Aleister Crowley, no less) to be there before midnight on St Frideswide’s feast day, the 19th October. While fossicking around, looking for the key, they were alarmed to witness 12 hooded figures moving in procession along the footpath through the churchyard. Chanting lowly in Latin they entered the church to presumably conduct a ceremony. Collins and co didn’t hang around to find out.