Potentially lethal biological agents were unleashed on an unsuspecting British public and chemical warfare was trialed on military personnel as part of Ministry of Defense (MOD) experiments carried out over decades, a shocking new book reveals.

In his latest work, entitled ‘Secret Science: A Century of Poison Warfare and Human Experiments,’ University of Kent historian Ulf Schmidt presents a series of case studies about covert state projects conducted between 1939 and 1989.
MoD released potentially lethal bacteria on London Tube, chemically experimented on soldiers
I recall when I was a teenager an older work colleague attempting to persuade me to spend a week (I think it was) of my holiday in a government project which the man told me was to find a cure for the common cold. It was well-paid, and he’d done it a few times, he said. Where was it? Porton Down. I never went. Even then it seemed stupid. – Ellis

END_OF_DOCUMENT_TOKEN_TO_BE_REPLACED 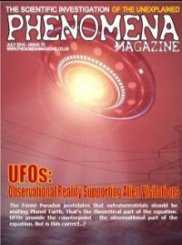 The latest issue of the amazingly FREE Phenomena Magazine is now available to download.

Here we are again, this time with an exclusive report from the USA by Pat Bussard on the 2015 International UFO Conference and as you will see all was not exactly sweetness and light amongst the speakers and staying with UFOs, Sean Casteel tells of strange encounters reported by celebrities. We also look at the legendary land of Hy Brasil and we also have part two of David Colman’s account of the experienced sceptic and th Rev Wendy Brindly tells of ghostly encounters in Hampton Court Palace. Finally, your editor gives an account on the subject of Orgone energy and the shabby way in which Wilhelm Reich was treated by the US medical fraternity.

Dr. Robert Lanza, who was selected by Time magazine as one of the world’s 100 most influential people last year, believes science must recognize the importance of human consciousness.
Quantum physics has proven contradictory to classical, Newtonian physics, setting scientists on the search for a “Theory of Everything” to bridge the chasm threatening to swallow any confidence we have in our scientific understanding of the world.

Prominent Scientist Says Consciousness Is Key to a ‘Theory of Everything’

A free article from Stratfor about quantum physics, parallel worlds, a cat in a box or is it, and where it’s going with computer technology – so transhumanism (thought I’d add that last bit).

Forget the hype that vegan food tastes like cardboard, it must be good if the company Google is seeking to buy out a faux cheeseburger company.
As reported by The Information, an unconfirmed report has it that Google recently tried to purchase Impossible Foods, a startup founded by Stanford University professor Patrick Brown. The offer, reported to be around $200 to $300 million, was turned down, however.

A government-backed study recently published in the UK has equated “conspiracy theorists” with violent terrorists, saying that belief in alternative viewpoints could be a warning sign of terrorist activity. The author of the study, Quassim Cassam, a professor of philosophy at the University of Warwick, also said that people who believe in alternative viewpoints have a potential of joining ISIS.