This page, this site, has always been shadow-banned.

Please help to combat this by sharing this page where you can.

If you can’t be arsed, then I’ll have to reconsider whether I can be

Brilliant if this is true:

This was emailed to one on my correspondents from Vivian Evans this morning:

All indigenous people’s could do this. Blow-ins, issuing legislation from stolen lands, can never be lawful.

Why are Australia’s governments desperate to enforce experimental inoculations on citizens?
An interconnected web of relationships, family ties, government grants, funding from sponsors, DNA harvesting, security risks, foreign powers and criminal corporations with billions to spend.
Who is paying who?
Who is related to whom?
Who is acting in whose interest?
Could there be a conflict of interest amongst some politicians, bureaucrats, academic institutions, business owners and others?
Why shouldn’t Australians demand answers?

On 15 – 16 February 2022 a Freedom Rally was held in Perth, Western Australia and Tribal Authority Denied as police arrest members of the Freedom Rally Group.

Arrests of Freedom Rally Group and Denial of Aboriginal Authority.

Help pay for Artur’s legal fees ► http://www.SaveArtur.com
While Pastor Artur remains behind bars, hundreds of people gather daily at the Calgary Remand Centre to show support for Artur and for the Pawlowski family, who have been through so much over these last two years
FULL REPORT from Adam Soos ► https://rebelne.ws/3Lzt1P1

The Blind and Foolish

The Vaxxxed Are Going to Go Ballistic

ON SKY NEWS… finally some honest numbers the covid lies and the false narrative by legacy media has failed and the Australian stats data has revealed the hysteria and false narratives a country has suffered which has resulted in thousand losing their income stream, their businesses their homes and for some their lives from despair and hopelessness feed 24/7 365 by legacy media for the last two years

Did you spot the recent, eye-popping news item about the overflowing morgue in Baltimore, with 200 decomposing, bagged and tagged corpses being stashed in a parking garage?
https://www.thebaltimorebanner.com/families-distraught-baltimore-parking-garage-turned-morgue-as-200-bodies-await-autopsy

So many people are dying, of all causes, that the Office of the Chief Medical Examiner for Maryland cannot keep up with the demand for autopsies, due to a staffing shortage. According to officials, the backlog of corpses was 150 in late January, and is predicted to be 300 this month.

I lived not far from Wave Rock (in Australian terms) for a few years, in the early 90s. An Original elder, who I was friendly with, told me how she was born and brought up near there.

By Wave Rock is a big cave; ‘Hippos Yawn’, the wadjelas (white people) call it. My friend said that when she was a kid living there the cave was covered in rock art but it was all removed by wadjelas, who claimed the area for their own.

I hear there have been massive bushfires in the area recently.

A topic previously pushed into science fiction is suddenly being taken very seriously based on an extraordinary video, taken, and authenticated by the US Military.

For forty years, 60 Minutes have been telling Australians the world’s greatest stories. Tales that changed history, our nation and our lives. Reporters Liz Hayes, Tom Steinfort, Tara Brown, Liam Bartlett and Sarah Abo look past the headlines because there is always a bigger picture. Sundays are for 60 Minutes.

The Unidentified: Are we alone in the Universe? | Under Investigation

Part 1 of the full interview. Ellis is interviewed by film maker Chris Turner for his documentary, “Don’t Mention the Reptilians”. 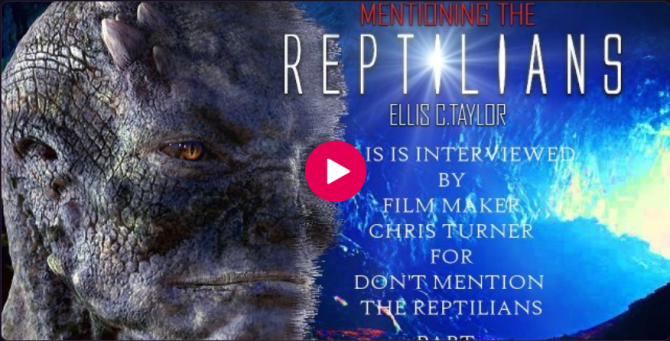 Filmed at Chris Turner’s epic seminar, REPCON, in Bury, Lancashire; Ellis C Taylor recounts some of his experiences, and encounters with the Goddess, fae, reptilians, and other beings from here and there, benign and malign.

On the morning of 12th October 2014 attendees at the October Probe International conference, as well as visitors to the sports centre watched and photographed an unidentified object high in the sky. Film maker Chris Turner: https://www.youtube.com/channel/UCUzk… was there to film one of the speakers and to speak to attendees at the conference. For many, it was their first sighting. The object sat in the sky without moving for a very long time, before drifting a little way and decreasing in size (possibly getting higher) and sitting in the same position again for a very long time. It was observed for at least an hour. The object was still there when attendees returned to the lecture hall – late. Personally, I felt nothing from it, no connection. What it was I don’t know. My apologies for the audio quality – that’s down to me. 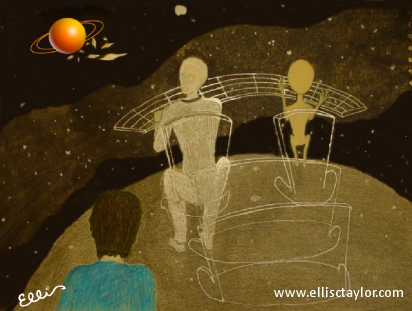 I’ve talked and written about this, for years. This is a recollection from INSIDE a tic-tac shaped UFO. The walls were solid but were changed to transparent, once we were in space. – Ellis