I have more to add regarding Alan Wilson’s proposal that Jesus is buried in West Wales.

Besides Gilbert’s, Wilson’s and Blackett’s, The Holy Kingdom, I’ve also been dipping into Australian sleuth author, Tony Bushby’s heretical tome, The Bible Fraud. I’ve no idea if they are aware of one another’s work.

Who of them is more right than the other I have no idea but both parties have carried out decades of deep and committed research and come up with masses of detailed information which includes several major and minor agreements and contradictions. Their strongly referenced compilations are inevitably uncomfortable for settled posteriors in religious and academic rectangles.

I’ll just make it clear, I am not suggesting in the slightest that Bushby or Gilbert, Wilson and Blackett are the only scholars and researchers to consider in this much muddied, yet e’er potent tale, of the history of Jesus Christ and the Holy Family. What they are, are hard core, maverick investigators who both follow the evidence they uncover, and as much as it is possible for the human intellect to do, are open-minded to changes in direction when presented evidence encourages it.

I am not qualified or well-enough informed, to judge either’s propositions, but they are both endlessly fascinating, educational, and confirming to me.  Beside agreeing with detailed memories from my own experiences, there are several more elements in both works that, in my view, have that ring of truth or stand out as ‘almost there’; for instance, you may have read my articles, Into Unbeing…I Met a Man, and Called to Cares.

This is an ongoing peek into Britain’s role in a major phase of what for very many is, the greatest story ever told.

Both books’ authors have Jesus ending his days in Britain. Alan, as we’ve heard previously, favours Cwm Dewi, near Dinas, in Dyfed as his burial place. As Alan says, ‘Dewi’ is not Cymraeg (Welsh) for ‘David’… as ‘everyone knows’, Dafydd is; ‘Dewi’ means, ‘One with God’ – and as I have related previously, is a recurring element in words associated with magic and mysticism.

Tony has Jesus (Yeshu), as Rabbi Jesus Cunobeline, an Essene who was welcomed into British Druidry and became King of Britain upon the death of Tenvantius, the father of the British princess, Mary Magdalen, Jesus’ second wife. Jesus, and his twin brother, Judas Khrestus, Tony Bushby concludes, were the illegitimate sons of the Roman Emperor, Tiberius.

Following the assassination of his son, Guiderius, by the Roman, Laelius Hamo (who had disguised himself as a Briton), Rabbi Jesus Cunobeline’s other son, Caradoc, declared himself the PenDRAGON and immediately chased after the Roman and slew him as he boarded a ship to escape. The distraught King Rabbi Jesus Cunobeline abdicated his throne in favour of Caradoc and became the Archdruid of one of the three great seats of Britain, and eventually was the Arch Druid of all Britain. He was now known as Bran Fendigaid – ‘Bran the Blessed’. Caradoc had become the Arvi-ragus (meaning ‘High King’), like ‘David’ in those days, a title, not a name (so I’ve heard, or read in one of these books).

Three boatloads of Jewish assassins were dispatched to catch and kill Rabbi Jesus Cunobeline after he’d legged it from Jerusalem.

At the age of 63 (according to Rabbinic and 2nd century Christian sources), Rabbi Jesus Cunobeline was stoned to death by a man called Pinhas at a place called Lud. The Mishna says he was then hung on a stake; it was the day before Passover. Bushby suggests that Lud is London and the actual site of the execution was in the vicinity of St. Paul’s.

Ludgate, London, as we all know, is about as far away as one can get in the Isles, from Dinas Island, in Pembrokeshire; and as well, we also know, that according to legend, the head of Bran, was buried under Gwynfryn, the “White Hill” – where now glowers the Tower of London.

The hill had been a significant, and probably sacred, locale to the ancient Britons and continued to be right up to when the exploding-prone Conk fronted up. (‘Gwyn means blessed, as well as white.) If Bushby is correct then it seems doubtful that Alan Wilson’s assertion (that Jesus is buried in west Wales) is correct.

Surely it is highly likely that Yeshu, and his Cor and family, would have deemed it expedient to spirit his body well away from the treacherous attentions of his assassins and the inevitably numerous informers. We must keep in mind as well, Jesus’ entire lifetime’s passion and involvement with esotericism and magic. The transcendental, very spiritually and geomantically aware, necessarily clandestine group, would have headed west, to the far west of the realm, to an island shaped like a serpent’s head (wisdom and rebirth), Dinas, where the sun sets at that very time of year.*

Dewi then, may still be buried in the little Dyfed valley between the mainland of (the Mabinogi’s) ‘Land of Mystery and Magic’ (Pembrokeshire) and its verdant, 466 feet above sea level, Dinas Island, despite the Tower of London legend of Bran’s buried head. Unwanted truths in The Triads and the Mabinogi tales were equally susceptible to mischief-messing as those in the Bubble and every other ancient WRITTEN source.

What magicians and adepts of symbolism and codes do in certain circumstances, when hiding secrets (or uncovering them), is mix the elements of real with opposites and reflections.

Let’s look at the tale of the Arch Druid Bran’s head being buried beneath Gwynfryn, the “White Hill”  – apparently the site of the present fortress Tower of London – and protecting against invasion – until Arthur dug it up.

There are caves in the cliffs of Pen Dinas and facing out to sea, towards where the threats from Irish and Arab pirates and Vikings would come from.

Dinas also means ‘City’ but unlike Lud (old London) there is no city wall. 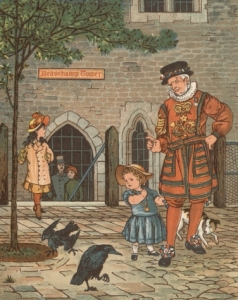 Another correspondence with the Tower of London is that ravens abound here, crows too (Bran is meant to mean ‘crow’), in fact on my very first visit to Pwll Gwaelod, I watched a group of rare choughs (y frân goesgoch) searching for grubs in the grass by the Old Sailors pub.

Two hillforts, where the watchful serpent’s eyes would be, were constructed in prehistoric times to guard both entrances to the reclaimed strait/valley, betwixt mainland and Dinas Island. (I suspect that they were more than hillforts as they have cosmic, geomantic and geometric alignments.) Very narrow winding roads run down to each side of Dinas Island. One comes from (the original site of) Dinas Cross, where a Celtic Cross once stood at the crossroads with the old road to Cardigan (now the A487), to the present-day hamlet of Cwm-yr-Eglwys. Unlike the western ‘castell’, on this side of the island there are still remnants of its hillfort. (The serpent has been blinded in its left eye, but it’s right eye gazes towards the rising sun – hope, promise, life-renewed.) 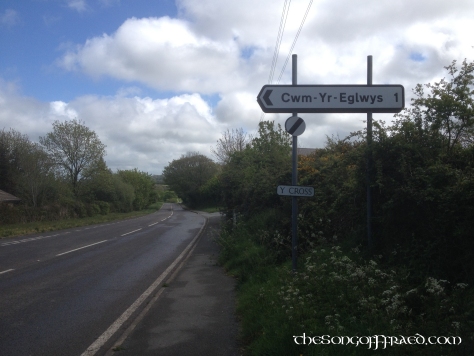 Site of the old Celtic Cross at Dinas Cross. This is on Y Ddraig Ffraed.

Before storms pounded and took away much of the cliffs of Cwm-yr-Eglwys, there was a cave that was home to a succession of early saints – until Brynach booted the last one out and moved in himself. The cave was called Ogof Byrnach (spelled like that) and in time, when the cave had been taken by the sea, a church was built on the spot and dedicated to him.

A series of devastating storms in the 19th century, did for the medieval church and left just the west wall, which still stands today.

The picturesque ruins of St. Brynach’s church and churchyard, Cwm-yr-Eglwys.

St. Brynachs church moved along the cwm and up Bryn Henllan, on the other side of Dinas Island, to another ancient sacred location, Henllan (the old sacred enclosure). ‘Bryn Henllan’ then, matches Gwynfryn as they both translate to blessed hill (In Yeshu’s time the hen -meaning ‘old’- is unlikely to have been current.) This is the road to Pwllgwaelod and it seems to have been a constituent of a sacred way that led from (wait for it) Ffynnonofydd (The Druid’s Well)* through the ancient sacred enclosure, down the side of a steep little valley to turn eastwards and along ‘Allt Tygwyn’ (meaning: the white, or blessed, house by the wooded slope) road, where Cwm Dewi, the white-painted house where Alan Wilson stayed as a lad, is still situated.

Possibly the route of the old Allt Tygwyn road. To the left is marsh. Up ahead is Cwm Dewi. The wooded hill slopes up dramatically on the right.

–  In a poem of Taliesin, translated by Davies *

* Ffynnonofydd: Ofydd means ‘Ovate’. An ovate is a class of Druid that are “prophets, diviners and philosophers, studying natural cycles. They also study healing and herblore.”
https://www.druidry.co.uk/bard-ovate-and-druid/

Old map of the Dinas area

Dragons and snakes were held interchangeable, revered and acknowledged equally for their spiritual purpose and their qualities. While tracing and assisting in reconstituting the fractured Songline of a sacred Ddraig  throughout the southwest corner of Cymru I’ve been blessed to witness the immense significance She held, and still holds for Nature, and the spirits of our Ancestors, and their teachers.  – Ellis