An article from my former website (contains links to web archives).

My very special place is the environs of the White Horse and the hills around it at Uffington.

The most ancient of the known white horses of England gallops across the Berkshire Downs (now Oxfordshire – since the border changes). Its beautiful design is constructed from chalk- filled trenches. Estimated to be at least 3000 years old its makers are a mystery.

Some claim that the figure is not a horse at all but a representation of the dragon allegedly slain by St George at the adjacent Dragon Hill. A grass-less crescent-shaped spot on the chalk hill is supposed to be where the dragon’s blood was spilt.

The shape of the horse has changed slightly over the millennia as the trenches have been cleared and refilled so its original dimensions are lost. Currently the horse is 374 feet long and 110 feet high.

Above the white horse is a so-called hill fort. Although it has commanding views over the surrounding landscape this was not its original purpose.

The proximity of the white horse (which is almost certainly a tribute to the Celtic Horse Goddess of energy, power and fertility – Epona, Rhiannon, Macha and Etain etc) suggests that the hill was a place of worship, a temple.

The peculiar beak-like mouth and the thin, bird-like bones of the horse are intriguing. (Birds were associated with the Goddess Rhiannon.)¹ Personally I think the beak represents a trumpet and that it is meant to suggest ‘the call’ or ‘the calling’ of the Goddess – the broadcasting. Numerologically the numbers fit – it perfectly orients to 330°.

I also suspect that the right-hand ear is really emphasising the third eye – which, if correct, makes the horse a unicorn. I feel comfortable now too, that the horse design is a construction of sacred symbols (letters) – they have a very striking resemblance to ancient writing.

In the past (and recently revived), games were held on the hill. Originally the games were designed to encourage the ardour of the young. The ancient Goddess of fertility and energy was the natural choice for this power centre. This seems strange to our modern ways that promiscuous games should be held in a temple but in those times all aspects of life were held sacred. Death always beckoned and new blood was essential for the security and continuation of the clans.

A ley stretches through the fort from the southern gateway, to Dragon Hill, then through Faringdon Folly, Bampton Church and on through Lew Barrow. (A far distant mast, way to the south, is in perfect alignment too.) Energy spirals up the hill to the centre of the temple spinning alternately clockwise and anticlockwise. All of the three so-called gateways between the ramparts on the summit line up with distant prominent landscape features.

The legend of the dragon-slaying George is more likely a reference to the spiking of a powerful energy; and likely one that was harmful (to who?) in some way. There it defuses under the levelled hill able only to injure the foolhardy grass roots.²

And close by (to the west) is what is known as ‘The Cradle’ or ‘The Manger’, a glacier sculpted masterpiece. A naturally carved dove on the cradle floor accentuates the spirituality of this ancient treasure. (see picture right)

The whole complex is a vast temple, and I have little doubt it is dedicated to the Goddess of our Blessed Isles, who the Roman’s called Venus. (More on this in my book, In These Signs Conquer.)

Apart from my possible discoveries (that I have signalled in this article) there is much more to uncover about this marriage of natural and human genius.³

I recommend that anybody who visits these Sceptred Isles makes post haste to this sanctuary. The Goddess lives here. She is guaranteed to refresh and inspire you.

1. White horses were also symbols of  the Sun hero Ar – Tur, ‘the real King Arthur’, according to L A Waddell in his masterpiece, ‘The British Edda‘; so perhaps the mouth is not a beak at all, but sun-rays.
2. Here again we have hints of King Ar-Tur; the real King Arthur, according to the British Edda can be traced back to one man who spawned all of the once and future kings. Not just the man gods, such as Thor and Indara but also the Christian hero St George.)
3. Underlined in the article above

Update 21st January 2007
Had a message, in my dreams, last night. Unfortunately I can’t remember it all, but apparently Dragon Hill was used as an altar and at one time the hill was considered to be connected to, or a representation of, Rigel (the left foot of Orion) and the brightest star in that constellation. Apparently families were taken there.

The moment of the Solar Eclipse at White Horse Hills 11th August 1999:

I was in two minds that day whether to spend the eclipse at Avebury or the White Horse. They lay in the same direction so decided to just go and see what happened. A van pulled out in front of me as I left Kingston Bagpuize, it had a White Horse emblazoned on it’s rear doors. So that’s where I went.

The couple in the picture were sitting on the eye of the horse (not Horus).

Solar Eclipse – link has been removed

Today I visited the Whitehorse Hills and the Avebury area hoping to see some crop circles. The day had started off wet and the prospects for a comfortable walk in the hills did not look promising. But as I motored along the 420 this yellow, bright thing, poked its head out from the clouds and decided to stay for the rest of the day. The hills were glorious with fresh new grass and cowslips painting the scene green and gold. Larks span in the air and sparrowhawks hovered over the ancient landscape. The old gnarled and windswept thorn still marked the direction of the ley that flows across country towards the St Marys’ at Faringdon and Bampton, (taking in Faringdon Folly and Lew Barrow too), and in the distance, beforehand, crossing the Mary line near Uffington. No crop circles though.

As I stood near the old thorn I asked for information on the crop circles – well it saves time if you can find out where to look.

Are there any crop circles nearby? – no.
Would there be any crop circles near the Whitehorse Hills this year? – no.
Would there be any in Oxfordshire this year? – yes.  Where? – The Baldons, Garsington, Clifton Hamden area. and look out for a surprising design very close to Oxford.
Are there any crop circles in the Avebury area? – no.
Have there been any this season? – no.
Would a crop circle appear today anywhere? – yes.
Where?- a long way east of here.
What would it look like? – It represents an egg, creation and a new beginning.
A new beginning of what? – no answer.
When will a crop circle appear in the usual Avebury area? – no answer. Yet I felt that we might have an inordinately long wait.

A crop circle did appear on 3rd May. and it did appear a long way east from the Whitehorse Hills, and what’s more it had a capital ‘E’ shape in it.

Well it’s now 16th October 2004 and no crop formation appeared at the White Horse Hills. Three known crop formations appeared in the Garsington/Baldons area. Another one reported in the same area was never located and another was found near the Rollright Stones in north Oxfordshire. The dragon that appeared in Garsington was certainly surprising, sadly the second dragon was despatched almost as soon as it hatched.

The source of my psychic information has done very well I feel. It’s one thing to predict formations and although I find this amazing in itself to predict the absence of one in such an extraordinarily attractive place was even more so, in my view.

Anyway for all those who love this phenomena appearing in this sacred landscape here’s the one that delighted us in July 2000; Mary Magdalene’s feast day 22nd July. Uffington Church is a St Mary’s. 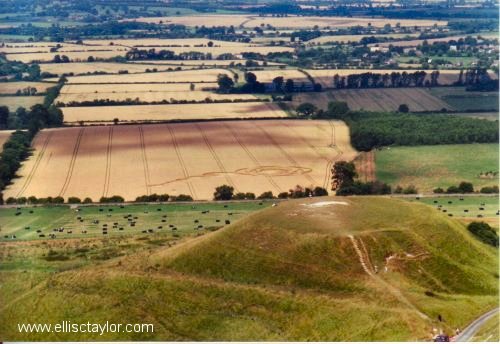 Notice the 3-cornered wood next to the crop circle. These triangular woods are sacred to nature religions, including Druids.

This formation on the Oxfordshire Centre for Crop Circle Studies

Crop Circles articles – a page of articles from my former website

This article on waybackmachine