Welcome.
In this edition:

WINDOWS ON THE WORLD

The Bigger Picture
What is the Global Action Plan?

Thanks to thousands of you sending emails, the Transport Secretary has temporarily halted the destruction of our ancient woodlands by HS2.
Chris Packham has also legally challenged the Government and we’re hopeful they’ll be more good news to hear from Chris in person this Saturday.
So please join Chris, members of ReThinkHS2.org, Extinction Rebellion and many others on Saturday afternoon at HS2’s HQ in Euston.
TIME TO RETHINK HS2: 108 ancient woodlands are set to be damaged or destroyed by HS2. Along with hundreds of other precious wildlife sites. It’s time to stop and think. If the Government is serious about the Climate and Ecological Emergency we face it needs to act quickly and get on a different track.

My email letters to the MP are blocked and returned.

I have also written to the Woodland Trust – an organisation I have supported and admired – asking what they are doing regarding 5G. They responded. Apparently they are watching the tree root damage. I sent them material that explains, with referenced studies and reports, how there are even more concerns they should be aware of and watching. I’ve not heard back from them this time.

I do understand why such organisations use Arsebook (broad reach etc), but the most aware people I know do not use it and would not use that or any other online hotline to the sinister organisations that monitor human thought-patterns, relationships and concerns and what they potentially will challenge more rigorously. The Chinese tested social credit and deprivation scheme is underway and social media platforms, all of them, despite what they say, or who they say they are, are part of it. Any truthful IT security expert will confirm that. Your profile is massively bigger than your front. – Ellis

Richie Allen: Media and political bullshit and lies and they’re coming for the internet, for you. Richie opens the phone lines to the show every second Thursday. The phone-ins are incredible. Callers drop in from all over the world. Today, Richie’s guests chat about the nature of reality, gatekeepers in the UK media, Brexit betrayal, teaching 5 years olds about masturbation in schools, the terrible treatment of the mentally ill and much more. Support The Richie Allen Show by donating at http://www.richieallen.co.uk Richie has been producing and presenting television and radio programs for the best part of twenty years. The Richie Allen Show airs Monday – Thursday at 5 PM GMT and at 11 AM UK Time each Sunday.

Aluminium is an ingredient in many foods and vaccines. A significant reason for it’s not-needed presence in your body is to enable effectively the transfer and reception of myriad wave and frequential technologies underway and coming. Magnesium is a natural and essential constituent of the human body and helps to remove aluminium. – Ellis

Please check the ingredients of everything that comes in contact with your body and the containers that these things come in. Rather than buy cheap food (from any of the supermarkets frankly), it is better to grow it yourself or exchange produce with people you know. – Ellis

Nexus Newsfeed: In 1959, in the San Fernando region of California, in a highly classified facility known as the Santa Susana Field Laboratory, one of the world’s worst ever nuclear accidents occurred. To date there has never been an admission by the US government or the corporate entities responsible. Nor has it ever been reported in the mainstream news.

Carolyn Tyler was a young child at the time of the accident, her family home just six miles away. In her extraordinary testimony as part of the ITNJ’s Commission of Inquiry into the Weaponisation of the Biosphere, Carolyn reveals the path that led her to discover the accident and the devastating toll it took on the life of her and her family, and many thousands of others who lived and continue to live in the area.
Bombshell nuclear coverup on the scale of Fukushima

The Nexus Newsfeed regularly updates throughout the day, every day, in the right-hand sidebar of most pages on this blog.

The brave mother of murdered Helen McCourt has begun a fresh search for her daughter’s body.

Marie McCourt, 76, is behind a new law that will keep killers permanently behind bars if they refuse to say where they dumped their victims.

But she is determined not to pin her hopes on mur­­derer Ian Simms telling where Helen’s body is and has begun re-­examining evi­­dence from his 1989 trial with search expert Peter Faulding.

She said: “I’m determined that while I’m living I will carry on searching. I want to lay her to rest so I know she’s at peace and not lying in some horrible place alone.”
Brave mum of murdered Helen McCourt begins fresh search for daughter’s body

Dr. James Lyons-Weiler, Health Freedom Ohio: Dr. James Lyons-Weiler is a research scientist and author of “Cures vs. Profits“, “Environmental and Genetic Causes of Autism“, and “Ebola:An Evolving Story”. He is the CEO and President of The Institute of Pure and Applied Knowledge (IPAK), which is a non-profit scientific organization that produces community supported science. You can learn more about IPAK here: http://ipaknowledge.org/ In this video Dr. Lyons-Weiler addresses diseases of mysterious origin. Epidemics of chronic diseases. Autoimmunity. Alzheimer’s. Parkinson’s. Multiple sclerosis. Intestinal and digestive disorders. What do all of these have in common? Aluminum. After reviewing thousands of studies, and evaluating the science that is supposed to show that aluminum in vaccine do not contribute to the risk of these conditions, Dr. James Lyons-Weiler is coming to share three fundamental realities supported by Science: 1) that population science fails to pick up on causality because it never tests the right hypothesis, 2) that animal models use doses of aluminum to induce some of these conditions on a routine basis, and 3) that the total available Scientific evidence does in fact overwhelmingly support enough of a causal link to take precautionary action against the injection of aluminum into infants, pregnant women, and adults. He corrects some misconceptions about sources of aluminum perpetuated by those who have stated that they do not want the public to know the truth. He will share research with you that points to easy steps we can all take right now to reduce our aluminum body burden by reducing exposure and to carefully help our bodies excrete more aluminum stored in our bones, organs, and brain.

Paul Seaburn, Mysterious Universe: Everyone’s favorite extinct-but-maybe-not animal just got a strange and unexpected new branch on its evolutionary chain. Genetic researchers studying the extinct Tasmanian tiger or thylacine have discovered that the creature shared more than just its uncanny looks (minus the stripes) with the wolf (Canis lupus) – they share DNA elements that explains their surprising similarities despite evolving independently for over 160 million years. Will this new information help bring the thylacine back from extinction? Or does it bode poorly for the future of the similarly threatened and hunted wolf?
Gene Study Surprisingly Links Tasmanian Tigers to Wolves

Brent Swancer, Mysterious Universe: One interesting and increasingly talked about area of the world of the paranormal is the Shadow Person. These are often described as vaguely humanoid entities of pure black, variously as either well-defined or more amorphous and cloud-like, which are usually only glimpsed in the periphery of vision and are known to conjure up waves of irrational fear. They have been speculated as being everything from demons, to interdimensional interlopers, to earth spirits or even angels, and they are commonly accepted as being a separate phenomena from regular ghosts. Considering their fleeting nature, evasiveness, and seeming aversion to be witnessed head-on, there has been very little photographic evidence put forward towards their existence, but on occasion some images come out that seem to be in keeping with the idea of Shadow People. While inconclusive and often blurry or vague, thee photographs offer a glimpse into a poorly understood realm of the paranormal, and here we will look at some of the more famous and indeed controversial such photos of Shadow People.
Mysterious Supposedly Real Photos of Shadow People

Here’s a definitely genuine one – taken by nightavis whe she attended a lecture I gave at the Probe International Conference in October 2008: 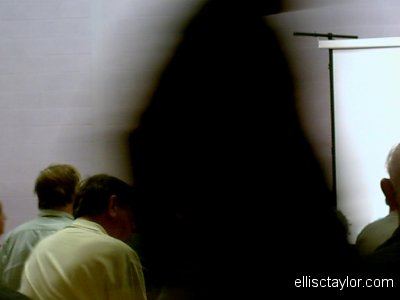 Shadow person blocks out view of podium at the Probe International Conference in October 2008.

Lorna Smithers, Fruits of Annwn: On Sunday 29th September I will be celebrating Gwyn’s Feast – a festival honouring Gwyn ap Nudd, who is a Brythonic warrior-hunter god and ruler of Annwn (the Otherworld). There is some information on its background HERE. For me this celebration has the following themes:

*Harvesting – In Cornwall, September is known as Gwynngala ‘White Fields’. I associate Gwyn not only with the harvesting of the souls of the dead but the harvesting of the meadows at this time of year. The greens of the apples and the black-red of the blackberries feel like his tastes and colours and this is the time we harvest them from our garden.
Preparing for Gwyn’s feast

Ellis Taylor: One dark and early Beltane season morn, at a holy well in Dyfed, waiting for the sun to rise from behind a mountain peak and bath the well in it’s glorious rays, the snorting and thunder of an approaching galloping horse broke the expectant silence. When I looked around there was a strange thick mist and all went quiet…and I was just in time to see the back of an Irish Terrier vanishing into the mist and the last shadowy evidence of a horseman, cantering in the direction of a strikingly green conical hill close by. It wasn’t the only phenomenal incident to happen that morning. The presence of the Fae and their king, Gwyn ap Nudd, though not spoken of with strangers, is remarkably persistent here, and with good cause. I’ve encountered the Fae here, on occasion when with other people…and I am almost sure that the horseman was Gwyn himself.

This is a video of the sunrise taken the day before:

Skeptiko, Alex Tsakiris, Richard Cox: gives us a deep dive into the spirituality of 9/11, schizophrenia and suicide.

You are advised to always check back. More items are often added during the day.

Thank you for visiting. This site is experiencing severe blocking. If you enjoy this blog, please tell your friends.