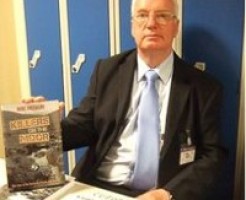 Mike Freebury was born and brought up near Birmingham. In 2000 he began his investigation into the Dartmoor Ponies incident and has continued in this difficult field of research ever since. Mike has given numerous talks on the animal mutilation problem and his book, ‘Killers on the Moor’, is not only his first book, but also the first book to deal exclusively with animal mutilations in the UK. Tonight he will be talking about the strange lights photographed over a mountainside in Mid-Wales.

Now she’ll have ruffled some scales!

What are the faeries? Where do they come from and where do they go when they’re not interacting with their human observers? Faeries have been an important part of the folkloric repertoire for hundreds (perhaps even thousands) of years, and while they are portrayed in the popular imagination through faerietales and have become disneyfied through the 20th century, their main presence is in the myriad of folktales and anecdotes from every part of the globe. They usually (though not always) take a humanoid form, and interact with human societies as ambivalent supernatural entities, appearing in our world to both co-operate with people and as general arbiters of mischief, while also living in their own Otherworld, sometimes accessible to humans either through accident or abduction. While the phenomenon is ancient, the belief in these metaphysical beings continues, and there are thousands of encounter reports from all over the world every year, as demonstrated by the recent survey by The Fairy Investigation Society, which includes c.500 testimonies.
Some Faerie Metaphysics

An international team of scientists has completed the first 3D virtual reconstruction of the ribcage of the most complete Neanderthal skeleton unearthed to date, potentially shedding new light on how this ancient human moved and breathed.

The team, which included researchers from universities in Spain, Israel, and the United States, including the University of Washington, focused on the thorax – the area of the body containing the rib cage and upper spine, which forms a cavity to house the heart and lungs. Using CT scans of fossils from an approximately 60,000-year-old male skeleton known as Kebara 2, researchers were able to create a 3D model of the chest – one that is different from the longstanding image of the barrel-chested, hunched-over “caveman.” The conclusions point to what may have been an upright individual with greater lung capacity and a straighter spine than today’s modern human.
3D Ribcage Indicates Neanderthals Looked Nothing Like We Thought

The story of Count Dracula, as many of us know it, was created by Bram Stoker, an Irishman, in 1897. But most of the action takes place in England, from the moment the Transylvanian vampire arrives on a shipwrecked vessel in Whitby, North Yorkshire, with plans to make his lair in the spookily named Carfax estate, west of the river in London.

But Dracula wasn’t the first vampire in English literature, let alone the first to stalk England. The vampire first made its way into English literature in John Polidori’s 1819 short story “ The Vampyre ”. Polidori’s vampire, Lord Ruthven, is inspired by a thinly disguised portrait of the predatory English poet, Lord Byron, in  Lady Caroline Lamb’s novel Glenarvon  (1816). So the first fictional vampire was actually a satanic English Lord.
Older than Dracula: In Search of the English Vampire

Flying through the skies on a broomstick, the popular image of a witch is as a predominantly female figure – so much so that the costume has become the go-to Halloween outfit for women and girls alike. But where did this gendered stereotype come from? Part of the answer comes from medieval attitudes towards magic, and the particular behaviours attributed to men and women within the “crime” of witchcraft.
The Evolution of The Medieval Witch – And Why She’s Usually a Woman

A drained picturesque lake in the grounds of 300-year-old Blenheim Palace has revealed a series of beautiful hidden rooms, sunken boats and mysterious graffiti.

All the water was sucked out of the huge feature lake as part of a multi-million restoration project which will see more than 460,000 tones of silt removed from the centuries old lake.

Archaeologists yesterday (Wednesday 31st October) entered the eerie chambers in the grounds of the ancestral home of Sir Winston Churchill after the flooded rooms were exposed for first time in more than 250 years, and revealed some startling secrets.
Blenheim Palace’s secret tunnels, sunken boats and hidden rooms revealed as centuries old lake drained