A Siberian snow queen’s fierce blast had temporarily dislodged polar Europa’s beastly 12-starred leaden mantle knocking the sprouted tyrant from the headlines even as she ground her hooves into John Bull’s crescent horns. Above and onto the dismal plumb clouds Helios shone as it always does but now its golden light cast only upon the outside of the heavy cloak that blighted Blighty. (Perfect weather for psychopaths and their nasty deeds, as you’ll see). Storm Emma, ‘Universal’, All that is, was charging in to cross swords with the dark pretender, snow and ice lay everywhere, it was freezing and the A and B roads detour to the M5 (44) were perilous slaloms. Dotted here and there I passed cars and a van half-buried in the trees and bushes.

You might think that was top-heavy with cryptic references, the rest of this true tale that I set before you now is as well…but first, by way of introduction…

Who knows another person’s story, how they got to be in the dire situations they have landed in? Instead many (and alarmingly increasing) humans, divorced from the wisdom of their intuition, automatically make assumptions armed with the trigger-happy Darkness’s fear-programming installed in their instinctual survival facility. It’s a recipe for compassionless, empathetic disability and entrained psychopathy.

Minus respect and awareness for our intuition humans are rapidly losing their humanity; there is little difference between a human that trusts in its instincts alone and a machine that follows its programmed commands. Everything that is communicated, encouraged and allowed by Earthly authorities (and their demon masters) that swarms into our life experience and demands our energy, obedience and conformity is purposely intended to suppress our intuition, everything. This small, still, fearless voice is what makes life here worth living.

Humans reacquainting themselves with, and making use of, their intuition is the Darkness’s greatest fear. Intuition is all-seeing and all-knowing. Unshackle it because It will guide you in the right direction for you every time. Never doubt it, life isn’t supposed to be a tedious drudge of fear, it isn’t about accumulating anything but experiences in a realm where anything is possible. Every experience you have is an opportunity to learn, to grow, to know a bit more, to succeed in what you are in this temporary state for; and if you take advantage of these lessons you become more capable of assisting others, and caring for this beautiful creation we live in, according to our specific paths, and purposes. Every one of us is a teacher, a student, and a helpmate. Intuition is the gifted guide to our authentic personal journeys and destinies. Wonders are waiting for you.

Beyond the pale: Tom’s story

The M5 had been heavily salted to keep the witch-queen down, and every passing lorry and four-wheel drive threw up murky sprays of sulphur-brown slush to quickly freeze on the windscreens of cars hindered with frozen screen washers. It meant that I had to stop at the next service station to hand wash the frozen smears from the glass. It was perishing cold. Only about a dozen cars populated the carpark, all except one belonging to the staff, it looked to me. I was struck by the beautiful design of the service station, like a huge round barrow, and how it blended into the environment.

Leaving, just as I approached the motorway once more I could see a figure in the gloom standing huddled against the biting wind and snow his thumb stretched hopefully out to a rare vehicle. I pulled up and asked him where he was going to. The next service station he replied. That was good because I would be leaving the 5 to join the 4 not long after that. He threw his bag in the back and clambered stiffly into the passenger seat.

Taking his gloves off and rubbing and blowing some warmth and movement into his frozen hands he said, “It’s taken me 27 hours to get here”.

“Blimey, where have you come from?”

“Aberdeen, and you won’t believe it, but I only just got out of the cardiac unit yesterday. The surgeon would kill me if he knew. I had three stents put in.”

“What! Why are you out here after all that? Are you ok?”

“I live in Worthing and I had to get back straight away…I had no choice. I’ve been working on the oil rigs there for 9 years and when I told the firm I had to go into hospital they gave me my cards…sacked me!”

“I’ve never taken a day off, never had a day’s illness before. When I first started work for the company a husband and wife ran it, they were lovely…but now their son runs it, and he is the exact opposite, a complete bastard. Yesterday when I left the hospital I went to collect my pay and they said they had already sent it to my address in Worthing. They knew I was in hospital…now I cannot pay my bills until I get home. I told them that and asked the boss if he would give me a sub to catch the train back (180 quid, I think he said).”

His boss refused. His only option, Tom said, was to hitch home…and that is how he came to be standing at Gloucester service station.

The night before he had been dropped at a border service station. It was late, and bitterly cold outside, so he made for the glow of the rest stop’s lobby and sat down to warm himself up. After a few minutes, one of the staff came up to him and asked if he was going to buy anything. He replied that he’d love to, but he had no money. The woman told him that in that case he had to leave.

Not wanting to cause any problems Tom picked his bag up, said farewell to the life-saving warmth, zipped up his jacket, drew up the hood and stepped out into the deadly blizzard. He’d had nothing to eat all day, nothing warm to drink.

He trudged through the snow to where vehicles would pass on their way back to the motorway. Several cars sailed passed and then one slowed and stopped about 10 yards along. It was a flash car, brand new. My passenger ran up to the car and the driver wound down his window. “Where are you heading?” the driver enquired.

“Worthing, but anywhere along the route would be great.”

“What are you going all that way for?” …On and on the conversation and questions went, the man in his warm car and Tom blasted by icy winds and snow, until the driver said, “Fetch your bag, I can take you as far as (I can’t recall where he said). My passenger ran back to collect his bag and just as he picked it up the driver called out to him, “I hope you freeze to death”, laughed, and drove off.

Eventually a lorry driver picked him up; strangely, he had come from Aberdeen. Fortunately, this was a good long ride for Tom. The lorry driver had been caught in heavy snow overnight and had slept in his cab awaiting the snow ploughs, along with many other vehicles. In one of the lorries, further along the queue, a mate of this one, had squashed a family of four, mum, dad and two little kids, who’s car had broken down into the safety of his warm cab, while they waited.

Tom got a ride to another service station. At this one, again waiting at the service station’s slip-road to the motorway lots of vehicles drove straight past him, but then a Mercedes stopped, a young bloke, suited and booted, obviously wealthy. The man wound his window down, a steaming coffee in his hand. Holding the cup out to him he said, “Bet you’d like one of these,” snatched it back, drove a few yards further and shouted back, “Well get a bloody job, and then you’ll be able to afford one!”

I dropped him off at the next service station. At least he’d be able to warm himself up at this one.

The weather turned even worse. The M4, all the way to Bridgend was treacherous, the wind whipped across the Severn Bridge, we were down to one usable lane. From Bridgend to the Swansea turn off was more-or-less clear but after that and for the rest of the journey it was one-lane city, and the road got slipperier and slipperier. I wouldn’t be back at chez moi for another 5 hours.

I prayed Tom would get home safely before I did.

Pulling up on the deep drifts outside my home I peered through the falling snowflakes, it was dark, but there was something different, an unusual brightness. It was so quiet. I alighted, gathered up my bags and first-footed the glistening fresh white carpet. I took my luggage inside, put the kettle on, grabbed my camera and took a few shots of the scenery and the sky…and then I sensed that I wasn’t alone, and although I couldn’t see them, that there were craft in the sky, and very close too. I snapped a couple of shots in the general direction of where craft always sit, over the bay…and then, as I went to go inside, there, to my side was a tall, lithe figure, standing just two feet away from me. I only saw it very briefly as I turned my head towards the door. About 6 to 7 feet tall, entirely composed of light, very slim, purple, green, white, orange and yellow, beautiful to look at. Its head was shaped like a long flame. It was an elf, genderless, and I knew it had watched over me and seen me safely home. An indescribable warmth washed through and all around me. I stopped in my tracks, looked again, and I couldn’t see it anymore. I hoped that I had captured an image of the being in one of my photographs…I hadn’t, sadly, but some of the photos do seem peculiar. Here’s one of them: 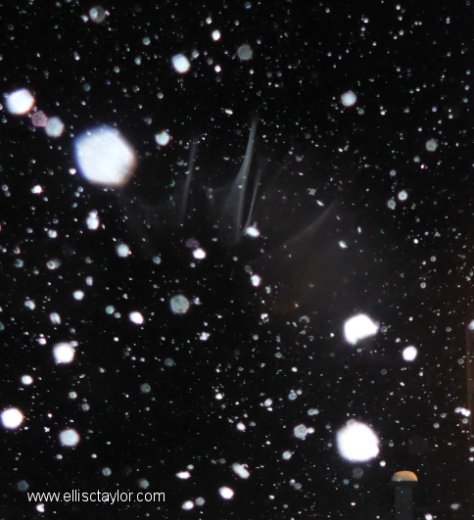 I slipped (not literally) through the welcoming embrace of Y Ddraig on the way back, where She crosses the main road, and I called in to Ffraed’s Well yesterday too. All three of us together again.

Maybe you can see the two little lambs, one white, one black, sheltering with their mother by the hedge, behind the well. Balance.

It’s good to be home. Wishing you well Tom.