Where else but along the fairy road, and by the fairy hill, a field full of Lady’s Smock; their hallowed flower – which is why (sensibly) there is a field of them, untouched: 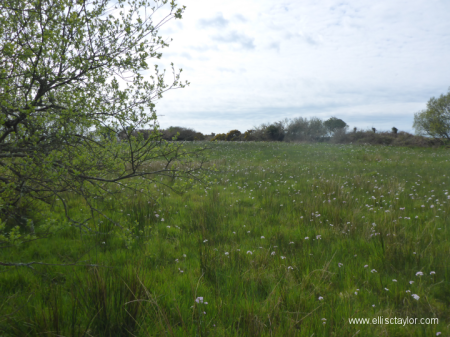 Hi everyone, just a quick post to update you.
I’ve been away from this passion of mine for several weeks…and how I’ve missed walking with this loving, healing, Dragon.
Of course She’s still here and in the last few days I’ve had the chance to wander paths new, and anew, with Her.
I can tell you She’s on fire. I’ve now almost completed all of Her extremely sinuous flow from Nevern to Llanychaer.

In her 2005 book Cunning Folk and Familiar Spirits, and the 2010 follow-up The Visions of Isobel Gowdie, Emma Wilby consolidates, and expands upon, a couple of decades of work by, mostly, continental scholars who had been investigating the possibility that records of medieval and Early Modern witch trials were documenting the survival of a pre-Christian shamanic visionary tradition. Until that point, study of the relatively large numbers of recorded witch trials in Britain had concentrated on the mechanisms of persecution, rather than any examination of the actual beliefs of the persecuted. Indeed, heavy-weight historians such as Hugh Trevor-Roper insisted that the only legitimate interpretation of the evidence from witch trials was as a function of social and cultural attitudes towards an aberrant cult. The voices of the persecuted were conveyed to us exclusively through the lens of the secular and clerical judiciary, and, according to 9780226296937_p0_v1_s1200x630Trevor-Roper and other historians, it was only the attitudes of these cultural elites that could be discerned from the documentation.

Familiars have always been recognised as a witch’s companion, an animal bird or creature that helps the witch with magic, it is not necessary to be a witch to have a familiar. Many people have pets that they feel intuitively linked to, non-witches are also able to have an astral-bodied creature that is unable to make contact in the physical realm. When people collect pictures or statues of a particular creature, they are actually subconsciously communicating with that creature and it is their familiar. A familiar is not owned by its companion, it uses freewill and intuition when its decision is made. Documented In ancient texts there was hysteria associated with familiars and some extreme and strange ideas, people thought that the familiar fed from the witch’s blood. Those who feared witches and witchcraft perpetuated these rumours. A cat or dog familiar will be very protective and if someone enters the home of the witch who the familiar feels shouldn’t be there, they will stare at the person until that person is so uncomfortable they leave.

The name Travis Walton is well known within UFO circles. The (in?)famous abduction story that took place in Arizona’s Apache-Sitgreaves National Forest made international headlines. While the case does have its detractors, a recent soil study of the site has come up with some very strange findings. Perhaps something otherworldly did occur on that November night in 1975.