Probe International conference
Will the Secrets Behind the 5000-year-old Cochno Stone Finally Be Solved?…..
Bigfoot in Britain…..
Eight-Foot Werewolf May Be Legendary Beast of Barmston Drain…..
Ludwig II of Bavaria: Suicide or Murder? How Did the Swan King Meet His End?…..
The Strange Story of the Black Prince of Canterbury…..
The 323 Dead Reindeer Code and the Missing Heads – Observation…..
Ancient Graves Containing Footless Sacrifices Found in Peru…..
9/11 Suspects: Robert Baer…..
Tromp family puzzle: ‘She did not know her name and had no idea where she was’…..
Case Profile: Medium Ena Twigg…..

I’ve just heard that I’ll be able to attend the brilliant Probe International conference in October. Looking forward to catching up with you all again.

With dozens of grooved spirals, carved indentations, geometric shapes, and mysterious patterns of many kinds, the Cochno Stone, located in West Dunbartonshire, Scotland, is considered to have the finest example of Bronze Age cup and ring carvings in the whole of Europe. Yet, for the last 50 years it has laid buried beneath several feet of earth and vegetation in what was a desperate attempt at the time to protect it from vandals. However, the famous stone is set to be unearthed once more to finally embark on an in-depth study of its enigmatic symbols in the hope of learning some of its secrets.
Will the Secrets Behind the 5000-year-old Cochno Stone Finally Be Solved?

In Halsham, England, an animal rescue worker who knows her beasts claims she and her friends recently encountered an eight-foot-tall fur-covered werewolf with a human face approaching their car on two legs. This is the same area where earlier this year there were reports of sightings of the legendary Beast of Barmston Drain, a similar creature with a famous past, and Old Stinker, another beast with extremely bad breath. Are they all the same or is the Halsham area under attack by a werewolf basketball team?
Eight-Foot Werewolf May Be Legendary Beast of Barmston Drain 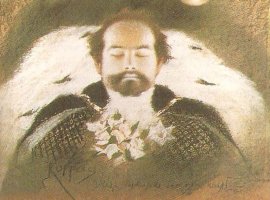 Ludwig II of Bavaria was the favorite cousin of the famous Empress Elizabeth ”Sisi”, the wife of Emperor Franz Joseph II. His name became immortal due to the impressive castles he built during his short lifetime. He was a visionary, an artist, and a man whose secrets brought his death.

For many decades, people said that Ludwig was mad. However, now researchers can explain that it wasn’t madness, but a cruel rumor created by his enemies (maybe even his own family!) Ludwig was very different than his relatives. He was a dreamer and an intelligent visionary. However, his connection to the Wittelsbach family made him one of the most shocking and scandalous people in 19th century Europe.
Ludwig II of Bavaria: Suicide or Murder? How Did the Swan King Meet His End?

Amongst the coffins in the Canterbury cathedral, visitors can find the tombstone of Edward of Woodstock, also known as the Black Prince. The 14th prince was the eldest son of King Edward III and Philippa of Hainault. His biography isn’t impressive, but his tombstone with a sculpture of his deceased body and strange epitaph inscribed upon it brought him lots of fame. Who was Edward of Woodstock and why is he known as the Black Prince?
The Strange Story of the Black Prince of Canterbury

I understand the guys concern and the points he raises. I’ve attempted many times to impress on people how complicit the media has to be when it comes to reporting incidents which have occult implications – with the numbers involved and the timing of reports, for instance. There are many numeric and occult factors present in this slaughter of such shamanically prominent creatures and its ritual reporting. We do however have to bear in mind that the reindeer were discovered several days prior to the report and, it appears, killed at least days before the Norwegian Nature Inspectorate team were taken to see them.

‘MrCati’ in his video is understandably concerned at the missing heads and wonders why the antlers were not taken as well. To the people who live in these areas the reindeer antlers were probably useless to them and just an added burden.  The creatures were obviously dead when their heads were taken, more than likely for food.

It’s not an incident I’ve looked into and probably won’t, but my suspicion is that it was a fortuitous (for the dark side) incident that has been contrived into a press-driven ritual after the fact – and I’m not saying that the lightning storm was a natural event either. (Just to make note of it a fighter jet is circuitously screaming overhead while I write this. 10.16+a.m.)

Since I began with my investigations and reports into the dark occult aspects of crimes two decades ago numerous other people have been drawn to such research. I am heartened to see that they have because besides the tangent insights they discover I don’t like repeating anything; when I do it’s for emphasis, or under duress or sometimes through frustration.

Of course it is a horrible tragedy which saddens me but I don’t have the time, my focus is on other equally vital matters these days. – Ellis

The next time you complain about having to stand too long during a church service or being required to kneel on hard floors, remember the story of these poor kids in 14th century Peru who had their feet cut off during a religious ceremony … and that was before they were sacrificed to a god who apparently believed footless children made good guards. On the other hand, you may envy the job of one of the adults buried with them. He was in a place of honor as the designated coca-leaf chewer.
Ancient Graves Containing Footless Sacrifices Found in Peru

A 21 year veteran of the CIA, Robert Baer is billed as “one of America’s most elite intelligence case officers.” Having worked field assignments in Lebanon, Sudan, Morocco, Iraq and other international hotspots, he was praised by Pulitzer Prize-winning investigative journalist Seymour Hersh as “perhaps the best on-the-ground field officer in the Middle East.”

He has written multiple books based on his experiences with the agency. He has worked as a consultant on documentary and television projects. He regularly appears as a commentator on CNN and other news outlets, and he writes a regular column on intelligence matters for Time. George Clooney’s character in Syriana, Bob Barnes, is based on Baer and his experiences with the CIA.
9/11 Suspects: Robert Baer

In the grips of a mysterious  crisis, the Victorian couple had fled their home in the Yarra Ranges hamlet of Silvan, in Melbourne’s outer east, on Monday with their three adult children.

By Thursday, four family members had emerged shell-shocked in four separate locations and one was still unaccounted for.
Tromp family puzzle: ‘She did not know her name and had no idea where she was’

The remembrances and perceptions of Ena Twigg are shared in the autobiography Ena Twigg: Medium (1972) written with Ruth Hagy Brod. Ena became renowned as a psychic and trance medium yet attested about mediumship: “Nobody can guarantee anything. We are dependent entirely on the conditions . . . We still don’t know why we can sit with a person a dozen times and get results and the thirteenth time get nothing, or vice versa.”