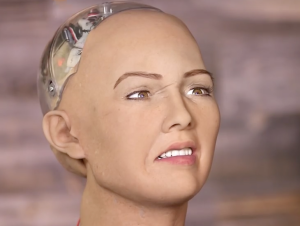 The evolution of humanoid robots is well into the concerning stage at this point. DARPA’s latest incarnation of its Atlas robot is seen in the following video beginning to walk at a pace with a sense of balance equal to most humans. Strangely, toward the end of the video, it is being “abused” by its human handler, which begs the question if a true artificial intelligence is permitted to flourish in this robot, if it might strike back at some point. At the very least, this robot’s demonstration of dexterity in the warehouse is likely to threaten humans economically as humans continue to be outsourced to machine labor at record levels.
Advanced A.I. Robot Reveals It Wants To Destroy Humans After Glitch During Interview [Watch] 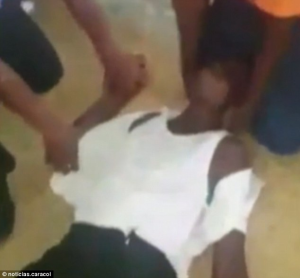 This is the bizarre moment 22 schoolgirls suffer ‘mass demonic possession’ after apparently summoning an evil spirit while playing a game of ‘Charlie Charlie’.
The girls aged between 12 and 15 took ill in the Choco region of Colombia and were filmed screaming and writhing on the floor in some chilling footage.
Other victims began foaming at the mouth while experiencing hallucinations and another even claimed she could see a ‘man dressed in black’.
Class of 22 Colombian schoolgirls suffers ‘mass demonic possession’ as they foam at the mouth and see visions after playing children’s game

When a human being is asleep, which is to say, in a trance, he continues to create subconsciously, because creation doesn’t stop. The question is: what is the purpose of the trance?
It’s a state of mind aimed at excluding alternative realities. So a person can be walking around and carrying on with his life, and yet he is in that trance.
Reality Trance

This article by investigative author Keith Noble is by far the most up-to-date research ever done about the Port Arthur shooting massacre. It is now entirely evident this massacre was not carried out by an intellectually disabled 28 year old Martin Bryant in 1996. The shooting on the 28th April, 20 years ago was so obviously carried out perpetrators with the knowledge and assistance of various persons in the government of the day. There were at least two shooters with advanced firearms knowledge and the entire operation was meticulously planned. A totally compliant Murdoch and Fairfax media asked no pertinent questions and reported the incident as instructed by the special operations department. This reporter once was a war correspondent and the reporting of disinformation about the Port Arthur events as they unfurled reeked of a military media exercise.
Advance obituary for Martin Bryant on government death list

Well, apart from it being in the Daily Flail, you can tell it’s going to be a hit-piece when they quote a ticket price in the headline:

He believes 9/11 was faked and shape-shifting alien lizards are ruling the world. So why ARE thousands of Australians paying up to $140 a time to hear David Icke’s crazy 12 hour sold-out seminars

2 thoughts on “13th July: Howlin’ at the moon. News & Features…ellisctaylor.com”