A message in blood

The lovely church of St Mary perches in a lofty position overlooking a south Oxfordshire vale where until recent times crop circles swept through the fields below most every summer. They stopped abruptly when she was clad about with a chastity belt of iron by English Heretics (Heritage), which interrupted the flow of the St Michael energy stream.

The contours of the landscape hereabouts portray the reclining body of the goddess and our ancients both acknowledged and feted her fecund presence with sites of special sanctity. Temples were raised upon her breasts, the twin peaks of Wittenham Clumps and on her vulva, long before St Mary’s church was raised at Garsington over 800 years ago. The goddess was known, according to dialect, as Gor, Cor, Car or Gar, and her navel lays hidden in a field, and is not marked now, though I have a pretty good idea where it is. The church now sits where stones once stood, but th 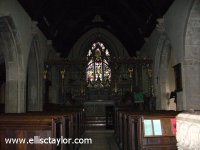 The St Michael and St Mary line kiss on Sinodun Hill, the goddess’ right breast of Wittenham Clumps, before the St Michael Line strikes for her vulva at St Mary’s. The Michael and Mary leys were traced and recorded by Hamish Miller and Paul Broadhurst and documented in their book, The Sun and the Serpent. They weave together across southern Albion diagonally from the coast of Suffolk, far in the east, to the Carn-Les-Boel stone in the far west of Cornwall following the Beltane and Samhain sunrises, when the sun is at 15º Taurus and Scorpio respectively.

Because of the immensity of the project Hamish told me that they didn’t get to record the finer details of the dragon’s travels in the latter stages, so I’ve dowsed and charted a part of this energy stream myself: The St Michael line from Marsh Baldon to Garsington.

Sinodun Hill, like a major stone in Avebury north circle, Silbury Hill, and St. Michaels’ Mount (all on the SS. Michael & Mary route) were all ‘ironed’ in the same time-frame as St. Mary’s at Garsington with fencing and/or corrugated iron.

On the 4th August in 2006 (the 216th day) a new crop formation, a hexagon with inner swirl and a winged out-rider, was discovered in a wheat field below Garsington church, Its Saturnian hex design and position suggested to me that it had a dark purpose; an intention to corrupt the energetic flow that coursed along the St Michael. I suspected that there would be further evidence at St. Mary’s.
There was. A visiting friend found it. Neatly written on the corrugated iron Faraday Cage (a chastity belt). Girdling the tower and facing the field, written in what looked like blood, were the words: ‘CHRISTIAN’S BLEEDING?

Next: Midnight, and monks by candlelight (Coming soon.)