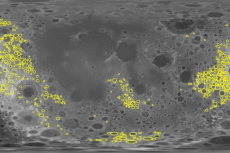 Some parts of the moon were so heavily bombarded with small asteroids billions of years ago that the impacts completely shattered the upper crust there, a new study reports. Similar impacts during this same era likely fractured Earth’s surface in the same way, generating the types of underground environments that the planet’s first life-forms may have exploited, researchers say.
Moon’s Shattered Crust Could Shed Light on Earth Life’s Origins

How timely! See Now you see it…Now you don’t. – Thanks Lee.

…and this is too:

An online UFO blogger has claimed “discovery” of liquid water flowing on the planet Mars in a photo of the Martian surface captured by NASA’s Curiosity rover.
The photo, sourced from NASA’s JPL website, was taken by Curiosity rover on Sol 707 or February 8, 2014, at 12:52:11 UTC.
According to UFO Sightings Daily editor Scott Waring, the photo shows a dark streak indicative of liquid water running from below rocks on the Martian surface.
UfO Blogger discovers flowing water on Mars

The staggeringly complex LHC ‘atom smasher’ at the CERN centre in Geneva, Switzerland, will be fired up to its highest energy levels ever in a bid to detect – or even create – miniature black holes.

If successful a completely new universe will be revealed – rewriting not only the physics books but the philosophy books too.

It is even possible that gravity from our own universe may ‘leak’ into this parallel universe, scientists at the LHC say.
Scientists at Large Hadron Collider hope to make contact with PARALLEL UNIVERSE in days

You don’t need to build a multi-billion pound machine to do that…you can just come on here…it’s a tiny bit safer too; though I can’t guarantee that of course.

Seriously though, in the history of stupidity, this is epic, and what needs to be collided are these idiots’ boof heads. It’s probably the most telling testament to the notion that intellectual prowess increases at the same rate that common sense declines. – Ellis 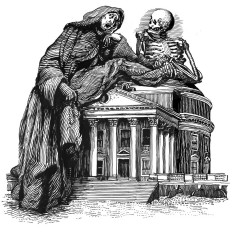 As Halloween approaches, this question pops up frequently. Virginia Magazine turned to U.Va. academics from six disciplines and asked them how each of their respective fields interprets the supernatural—spirits, visions, the undead and more.

None of the professors interviewed confessed to believing in ghosts themselves, but all study some aspect of the supernatural. Whether through qualitative anthropological analysis, deconstruction of literature and photography, archaeological digs or examining faulty neurons in the brain, these researchers each shared a bit of their vast and varied understanding about the human longing to believe in the spiritual realm.
Ghost World: A Look at the Supernatural Through the Lens of Six Disciplines

The question might sound crass, but then again, why should it? Dr. Oliver Sacks was one of the world’s best known and beloved neuroscientists, but at the time of his passing he was also an outspoken opponent of scientific findings suggestive of an afterlife. So, should a question contemplating a reality he was never willing to consider offend? Our cultural reflex to respect the dead may be trying to tell us something about underlying scientific question — what happens after we die?

Join Alex Tsakiris for an interview with near-death experience researcher and University of North Texas professor, Dr. Jan Holden, author of The Handbook of Near-Death Experiences
What would Oliver Sacks say about the afterlife now?

Dr. Jim Tucker works at the University of Virginia’s Division of Perceptual Studies (DOPS) as a reincarnation researcher.

He has a database of about 2,000 cases of children who seem to remember past lives. Some of these children’s memories have been verified to match in detail the lives of people who have died, suggesting the memories are genuine.

Tucker spoke with Epoch Times about his work, starting with the terminology. In his academic work, he usually prefers terms such as “survival” instead of “reincarnation.”
Video Interview With Dr. Jim Tucker, Reincarnation Researcher at the University of Virginia

Is it possible to communicate with the spirit world? That has been the question which has driven the invention of a number of ‘spirit technologies’, from the Planchette to the Ouija Board. In the glory days of Spiritualism, they became almost household items, and though not so much in vogue in modern times, they retain their otherworldly, liminal reputation.
Conduits to the Afterlife – Watch a Wonderful Short Documentary About Spirit Communication Devices

This is one example of sceptical cynicism being very dangerous. Ouija Boards, and the like, do not work just because of the ideomotor effect. They are seriously capable psychic focusing tools that in conducive circumstances assist in burning holes through the frequential shield just as the sun’s rays will sear through certain materials when directed through a piece of glass. They are not mere parlour games. I’ve learned that through personal experiences and observations, that had both benign and malevolent results (and after-effects in some cases); and I’ve seen even the most proficient and well-versed practitioners tricked by entities set upon mischief.  – Ellis