Floria Thames is a writer and artist… only occasionally, otherwise too busy with merciless day jobs.

Actually Floria is much more than this, but it’s how she modestly describes herself. Some of us like to call ourselves writers, and some of us are. I’m more of a scribbler myself, but Floria, she’s the real deal. She’s a class act, generous, compassionate, extremely intelligent, very well read, (a) sensitive, insightful and articulate (in several languages). She’s a very good artist as well…in fact, from what I’ve seen, Floria has swags of talents to share and brighten this world, and deserves every opportunity to do so.

I’ve known Floria for many years now. Throughout she has been my muse, my confidante and my inspiration, but we have never met personally. I am privileged to call her a very dear friend.

I am thrilled to bits that Floria Thames has agreed to write an article for this blog and hope with all my heart that this opens a door for her to show the world what she has to offer it. – Ellis 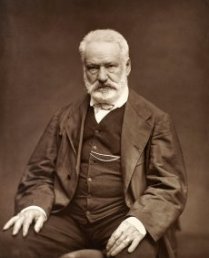 Probably Jean Cocteau defined him best: “Victor Hugo was a madman who thought he was Victor Hugo“. We all know that famous list from the “Dossiers Secrets”, published by Lincoln, Baigent and Leigh, back in 1982. But, to avoid getting biased by the “da Vinci codes” industry, let’s go further back, to the 1959 Classiques Garnier edition of “Notre Dame de Paris” and, there, in the preface, we’re told that Victor Hugo had spent four days with Charles Nodier in Reims, in 1825. And that these four days of tête-à-tête proved to be of great importance in the prehistory of the novel (Raymond Escholier said this, cited by J-B Barrere). Charles Nodier was (allegedly, of course) the Grand Master of the Priory of Sion until 1844, when Victor Marie Hugo will take over the helm, followed in 1885 (after his death) by Claude Debussy, only for the list to (“officially”) close with Jean Cocteau in 1963.

Victor Hugo had an incredible personal life, full of drama, tragedy and passion. His brother, Eugène, with latent schizophrenic tendencies, had fallen (as well) in love with Victor’s fiancée, Adèle, and, according to some records, “went mad on the day of the wedding and ultimately had to be committed to an asylum where he died in 1837” (John Chambers). It must be added here (for those in the know) that Victor’s wedding with Adèle Foucher took place in Église Saint-Sulpice de Paris, in 1822. After so much romantic waiting, love poems and exaltation, double betrayal was to follow: Adèle started a tumultuous affair with her husband’s close friend, literary critic and fellow writer and poet, Charles Augustin Sainte-Beuve:

If the devastation of deceit and jealousy (which had turned his world up-side-down) was not enough, full-blown tragedy struck: his daughter drowned at only 19:

In fact, as a tragic father, the writer survived all his children, apart from Adèle (named after her mother), who was to end up in a mental asylum, just like her uncle Eugène, victim of “schizophrenia”:

And, just like Arthur Conan Doyle, who tried to contact his son Kingsley through spiritualist sessions, Victor Hugo attempted to speak to Léopoldine – and not just to her – via séances. A book has been written, extensively, about this mediumship period, during their exile in the Channel Islands, nothing short of gripping and intriguing:

Now, back to “Notre Dame de Paris” (1831) and to all those conspiracy theories. In February 2001, I wrote down on a piece of paper: Esméralda l’Égyptienne and I started to anagram.

What I came up with, was: Seinte Magdalene Péril. I took the novel from the shelf and started to read it again.

Is this a novel about Mary Magdalene? (just asking)

Just came to my mind: in July 2001, these two posters were plastered side by side in Wembley Park Station, Metropolitan line. They came my way (while going into work) just when I was wondering if the anagram made any sense…

8 thoughts on “Who Was Victor Hugo?”