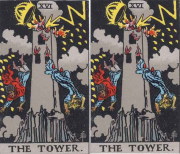 Well, Lughnasadh climax (7th August) is almost upon us and it’s Two Towers Day – the 216th day of the year. 16 being the number of the Tarot Tower.

216 is a code that, together with its factors and multiples, is written in many Ancient and modern mystical concepts and teachings across the world, and encoded in landscape and architectural forms as well; not least, originally, because of its association with the Precessional age of 2160 years, and its relationship to the 2160 miles diameter of the moon. Numbers like 72, 108, 144, 666 (6x6x6), for example. It is occasionally written in the form of letters and abbreviations too e.g. Tao, Tax, B.P., FOX, L.A.X., and B.A.F.. (U.S., by the way, is 119).

..and the poetical genius, Percy Bysshe Shelley (who strongly resembles very much, facially, an exceptionally talented scribe I know, and suspect is a reincarnation of him, for more reasons than that) was born in 1792.

Oh! not the visioned poet in his dreams,
When silvery clouds float through the wildered brain,
When every sight of lovely, wild and grand
Astonishes, enraptures, elevates,
When fancy at a glance combines
The wondrous and the beautiful,–
So bright, so fair, so wild a shape
Hath ever yet beheld,
As that which reined the coursers of the air
And poured the magic of her gaze
Upon the maiden’s sleep.

A random passage from

When  August comes around the dates adding to four (13th, 22nd, 31st) bring significant incidents to impact this world, either on that date or for the future, often both.

I’ve talked of Sussex before, many times. It is, from my research and information, along with Buckinghamshire and the Devon/Somerset area, a main stronghold of dark occult activity in the UK. (and this piece even mentions Pulborough and Clapham Woods, two places that are associated with the disappearance and murder of Sarah Payne.

A rare audio-only talk about the Black Alchemist phenomenon, recorded in the late-1980s when it was still happening:

It’s about more than the title but it’s the one National Geographic have given it. Still, it’s something I didn’t know.

…and a new video from the lovely Geoff Byrd: