A repost from my former website, Looking into the Dark Places:

I found this hexagram whilst looking into the mysterious disappearances of Daniel Nolan and Daniel Entwistle, and 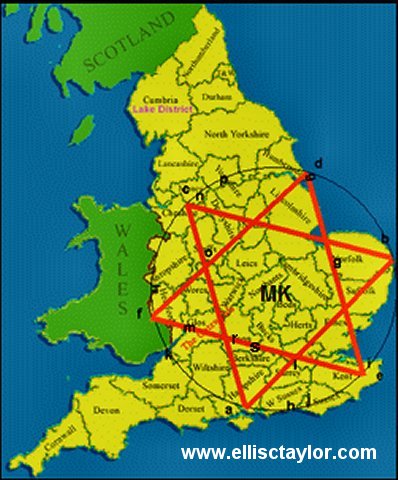 Note: the southern tip of the
circle does not leave the mainland.

This hexagram (points a,b,c and d,e,f) became apparent once Daniel Lomas was almost killed in Altrincham. What are the odds of 3 lads called Daniel going missing, killed or nearly killed, on specific sacred days, at each point of a perfect equilateral triangle?

Each angle is 60 degrees, totalling 180. 180, which is 18, the Tarot Moon Card.
180 totals 9 by natural addition. Each arm of the triangle is 180 miles long. The 27th book of the Old Testament is the Book of Daniel, 27 is also 9 by natural addition. 9 is the number of endings and is also identified with the planet Mars,which is closer to Earth now than it has been for over 70,000 years. This hexagon appears to be what is known as a ‘Mars Triangle’. Several other allusions to Mars appear on the triangle – 666. I understand that a hexagram is a representation of the Tree of Life and directly applicable to the Passage of the Equinoxes – Pisces to Aquarius. R. Lewis explains it in his book, “The Thirteenth Stone”. I’m more of the opinion every day that missing children, if not all, most are the ‘first born’ that are killed by the Herods and the Pharaohs of our time as they attempt to hold back the tide. They’ve got NO CHANCE. We are not looking at first born in a family unit sense, but first born as Children of Aquarius (so-called Star Children – the Star being the Tarot’s Aquarian card). The Last Days are here, but not the Last Days as Christian’s are told. Christianity, born and bred in blood and abuse is part of the problem that will be washed away with the (allegorical) Aquarian Flood.

The lines of the hexagram and the line of the circle, which closes it pass through some significant places pertinent to serious crimes. (see above) You will notice that David Kelly, the recently done away with weapons inspector lives on the line (f-e).
His home is positioned on at least one other alignment, besides the one I noted on my headlines page (18th July) http://www.leyhunt.fsnet.co.uk/lhunt86.htm
The line flows from Lulworth Cove, on the south coast to Withernsea (d-top right point of the hexagram – see above). A more detailed description of the alignment is on the alignments page (mouse-over above image for diagram)

In the centre of the hexagram is MK, Milton Keynes, ultra city of the illuminati – see Eyes Wide Shut. – Thanks to Clare for pointing this out.

Several of my articles are referred to in this post that are, at present, no longer on ellisctaylor.com.